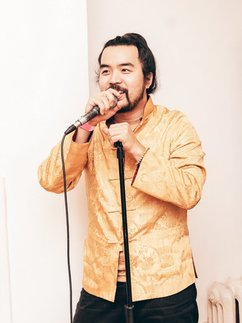 Anto has travelled across North America & Asia, inspiring audiences through laughter. He strives to help people realize the potential within themselves through humourous personal stories.

He has over 20 years experience working with families, earning a diploma & degree in Early Childhood Education. He currently works part-time as a Nanny with multiple families across the GTA.

Anto performed on the independent Stand-up Comedy tours “the Sleeping in our Car Tour” & “The Sleeping in our Car 2er, travelling across Canada. He won Best Independent Venue (the Shanghai) @ Ottawa Comedy Awards in 2010, the 2012 I Heart Jokes award for “Open Mic Hero” and was a finalist in the Hong Kong International Comedy Festival 2014. He has made appearances on Omni News, CBC Radio, XM Radio, RTHK, TVB Pearl, Proper TV And his stand-up comedy video GOW was featured on the front page of Reddit. He was featured on Coming to the Stage season 4 in LA produced by Comedy Dynamics.
​
​He emcee'd Kollaboration Talent Showcase, Karaoke w/ China Doll at The Shanghai, youth events, variety shows and many more!  He also competed at the Canadian Festival of Spoken Word Poetry in 2013. He loves organizing and MCing English-Cantonese-French weddings customizing the experience for the couple's big day.

Anto featured his solo shows Shed Talks & Love So Far in the Toronto Fringe Festival in 2016, and in Montreal Fringe Festival in 2019.  Sharing his personal story in such a creative way was a huge highlight in his career. He received praise from both Mooney on Theatre and Montreal Theatre hub for his aptitude in storytelling, poetry & comedy as well as his genuine connection to intimate audiences.

Spreading his style of high-energy humour to many audiences is his life's greatest passion. Being present and engaging brings the entire room together, where they can finally express themselves. His versatile style of performance lies in owning moments. A hypeman at heart, he brings hilarity, excitement and true emotion to the stage. Being so personal, he brings honesty and fun to every experience.